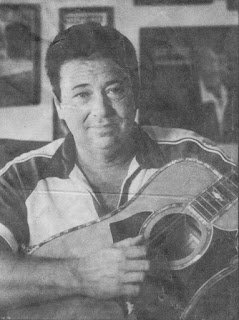 Photo: Danville  Advocate Messenger
Made available to me by Bill Randolf.


Kendall Hayes was a song writer from Perryville (Boyle County) Kentucky. Ken never made it big as an recording artists or entertainer in the country music field. However he did record a few singles and I just happen to have a couple of them! And though Ken may have not made it big as an entertainer or recording artist, he did write one monster hit that opened up an important spot for him to always be remembered in his field. Ken wrote LeRoy Van Dyke's super hit "Walk On By". In 1961, "Walk On By" was No. 1 on Billboard magazine's country singles chart for 19 weeks, and reached No. 5 on the pop chart. I would say Hayes and Van Dyke both did well with it!

I knew Kendall, but not very well. We both were from Boyle County Kentucky, but I moved from there just short of my 18th birthday, and just about the time Walk On By was topping the charts for Hayes. I did have some nice phone conversations with him in the years following moving from Kentucky, but never saw him again. Kendall died in 1995, he was 59 years old.


Below is both sides of a 45 I have be Kendall, Just click on title to listen. I think I can round up a few more, but for now you're welcome to enjoy these two by Kendall Hayes, the man who wrote "Walk On By"


And Kendall's super hit "Walk On By" by Leroy Vandyke

Please sign my guestbook so others will know you were here. You may also read what others have had to say by viewing the guestbook!

Please note: I realize no profit from the music on these pages. They are from my personal collection, and for educational purposes, or maybe just bring back a memory for you!

And remember: Come back any old time, as the latchstring's always out!!